“If needed I will die for Jesus, but I will never leave Him.”
Sumi, who was forced from her village because of her faith in Jesus

The persecution of Christians in India is intensifying as Hindu extremists aim to cleanse the country of their presence and influence. The driving force behind this is Hindutva, an ideology that disregards Indian Christians and other religious minorities as true Indians because they have allegiances that lie outside India, and asserts the country should be purified of their presence.

This is leading to a systemic, and often violent and carefully orchestrated, targeting of Christians and other religious minorities, including use of social media to spread disinformation and stir up hatred.

Most church leaders are men, and being a pastor is understood to be one of the riskiest vocations in India. Hindu extremists target leaders and their families to instil fear among the local Christian community. Persecution of Christian women and girls often takes the form of physical abuse and, in some reported cases, trafficking. The daughters, sisters and wives of pastors are particularly vulnerable. 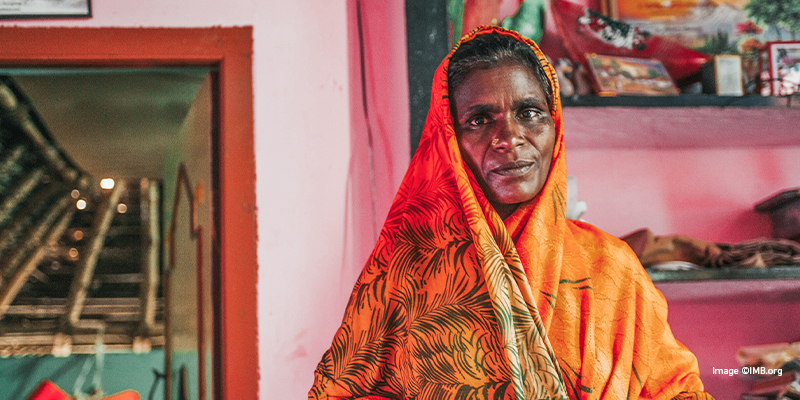 Simply being a Christian in India is enough to be in acute danger of persecution. For those active in telling others about Jesus, the risk is heightened even further.
Sumi – whose name has been changed for security reasons – and her family were amongst several Christians forced from their village because of their faith. They set up homes on farmland, but the conditions were poor.

Despite threats and attacks by village extremists, Sumi’s husband, Ravi, kept telling others about Jesus. “That was the joy of his life,” she shares. Tragically, Ravi’s perseverance and bravery cost him his life. He was shot dead.

Clutching her Bible close to her chest, Sumi – now a single a mother of four – remains steadfast in her devotion to Jesus. “I will continue living here, and will continue the ministry of my husband,” she says.

When Sujit led 60 people to Christ in his village he faced opposition and violence. Three times the villagers destroyed the church, three times he was beaten. Yet he has not given up and he intends to return.

Open Doors local partner Rajesh (not his real name) explains the risks of following Jesus in India and tells us what it’s like for him to support vulnerable believers.

Lord Jesus, help our persecuted brothers and sisters in India to stand strong in their faith and shine as stars (Philippians 2:15) in their local communities. Continue to manifest Your love and power through healings and miracles. Guard Your children from harm and equip them for the challenges they face. Provoke social media companies to do more to combat the use of their platforms to spread disinformation and hatred. Soften the hearts of influential local leaders and officials towards Christians, so that greater protection is given to them. Amen.

Latest news and articles on India…