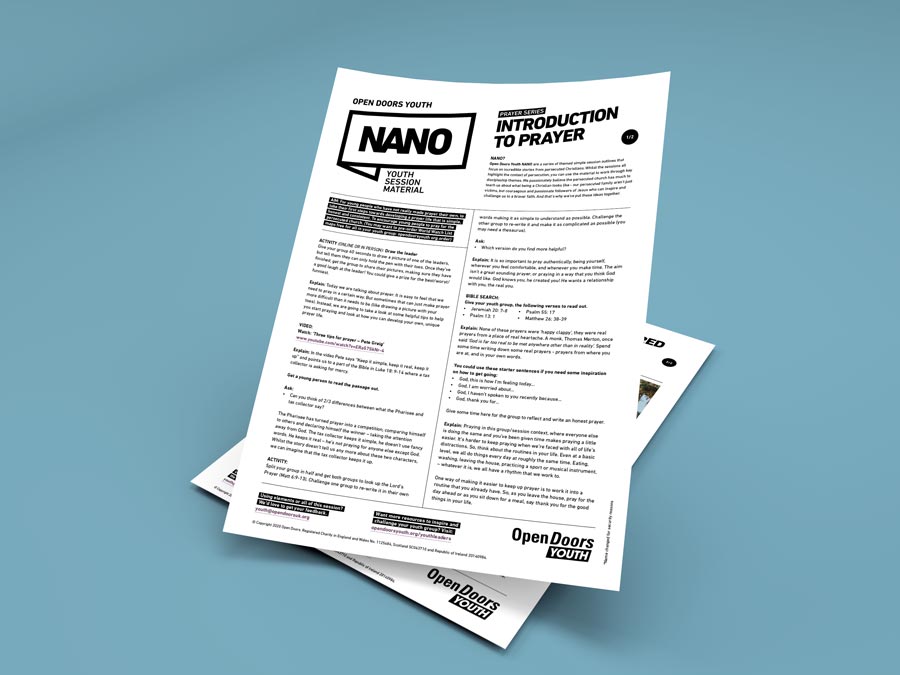 We’ve created NANO as way to show that the real stories from persecuted Christians can inspire all kinds of areas of our faith as we grow as Christians. We shouldn’t just hear from our global church family one Sunday a year or when the theme of persecution arises in the news. Persecuted Christians have so much to teach us about prayer, forgiveness, passion, worship, giving, distraction, hope, perseverance, God’s plan for us and much, much more. And the lessons they can bring to us just seem all the more authentic and valuable because of the context of threat, violence and intimidation that they live with.

Just sign up to check out the sessions and see for yourself. We’re releasing sessions regularly (every 2-3 months). Most will have videos, all will have interactive activities, Bible material and prayer times, plus all have been written to work both online or in person (depending on lockdown restrictions). The outlines aren’t exhaustive – they can be used as a script for a session or you can take the elements you think that will work for you and adapt the rest.. you’ll know what will work best in your group.

Prayer series – featuring Pete Grieg video explainers
To launch Nano we’ve created a series on prayer. These four short sessions look at what prayer is (and how to do it authentically), answered prayer, unanswered prayer and how to persevere in prayer.

Forgiveness session
A simple session featuring an incredible video story from teenager Jeovani whose life was radically changed after an attack on his church several years ago. Includes game ideas, Bible reflection and questions along with suggested prayer points too.

Truth or Lie session
A session outline focussing on truth and lies, looking specifically at the way Christians in India are being excluded, threatened and attacked because of the lies being told about them. This session has some real concrete actions to take that will help your group make an active difference to the situations facing Christians in India.

Identity session
A simple session focussing on a video story from Manga in Nigeria whose dad was killed in an attack by Boko Haram. Manga was left with serious scars after the attack, but instead of letting those who gave him the scars define his identity, he chose to see the scars as a sign of how God saved his life. It’s a powerful story that we’ve combined with some Bible passages, discussion points and a reflective prayer activity too.

Cred session
How much importance do we place on what others think of us? We all want to have a good reputation, to have decent cred, but do we forget to prioritise the fact that it’s God’s love for us that matters most. This session uses the incredible story of teenager Soy in Laos to inspire us to let how God sees us come first. Featuring Soy’s video story plus Bible, prayer, game and discussion ideas.

Change session
How do we react when faced with change and uncertainty. Learn from young Christians in China whose youth camp was raided unexpectedly by police.

Brother Andrew: A disciple of Jesus Christ
A simple session that explores the inspiring life of Brother Andrew, encouraging us to say ‘yes’ to God and to be braver in our journey with Jesus.

Get some or all of the sessions using the form below – all are simple downloads, so you’ll get them immediately. Woo.